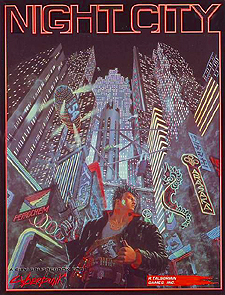 You can hear them moving up fast; faster than your meat legs can carry you. There's a snick as they pop the rippers and move in for the kill; you flatten against the alley wall, and brace your Minami against the slick, slimy stone. It's now or never, you think, slamming back the bolt and offering up a prayer to whatever dark and nameless gods might be listening.

Maybe if you'd known this was Blood Razor turf, you woulda been smart enough to stay clear after dark. Maybe there was another way to get crosstown and infiltrate Arasaka's Japantown base, but you didn't know it. Maybe if you'd stopped to download some info from a dataterm before you walked right into the sharp end, you wouldn't be here now, waiting to become a booster's latest mutilation victim...

But you're never gonna know. Not now. You're not getting a second chance.

Because this is NIGHT CITY.

NIGHT CITY. A monster sourcebook containing over 180 jam-packed pages of information on the definitive CYBERPUNK setting! Hit the CONTROLLED URBAN ZONES with 3D maps and detailed, building PLANS, PERSONALITIES, ENCOUNTERS and CONTACTS. The FLASHMAPS Section puts you "on the spot" at the hottest restaurants, clubs, and theatres, as well as SCHEDULES, TRANSIT MAPS and AREA VIEWS. The ARTICLES Section interfaces you with background on SECURITY, PEOPLE OF THE CITY, GANGS & TURFMAPS, plus a U.S. 2020 overview! But that's not all - NIGHT CITY also comes with a full-colour, 2'x3' 3D map of downtown Night City, your backdrop for adventure.

So, if you're looking for the ultimate dark future urban environment, take a trip to NIGHT CITY. Because you may not live to get another chance.