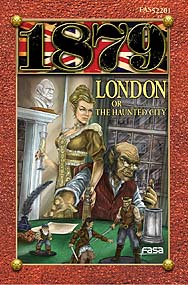 This volume describes the London of 1879's alternative history in massive detail. From the gambling dens and brothels of the East End, to the manufactories along the Thames, to the elegant shops of the high street and the fashionable residences of the West End, the great metropolis is laid out ready for exploration and adventure. The inner workings of British politics, the secrets of the Research and Development departments, and the machinations of the secret societies are laid out for the enterprising gamemaster to inflict upon their players. With this book, one could run an extensive campaign in the 1879 game world without ever leaving the Great Smoke!

1879 is a role-playing game set in the late Victorian era of an alternative history, with low-level magic, high-level adventure, and vast possibilities as the Age of Steam gives way to the Age of Electricity. London, or The Haunted City, is the first gazetteer volume detailing the home of the Rabbit Hole and the capital of the British Empire. Geography walks through every borough and provides game-ready locations and Adventure Hooks. Transportation covers not only how you get around in London, but how The Knowledge works. Communications deals with telegraphy, the Royal Mail, how the post and trains work together, and that new-fangled telephone device. Politics describes the governance of the British Empire, one of the primary industries in London. Everybody keeps track of the Royal Family, so there's a bit of a writeup on them in here. Criminals doesn't just talk about types of crime endemic to London. It discusses the law in relation to the sorts of activities player characters are likely to get up to. Further chapters include History, Business, Culture, and Magic. At the end is a complete adventure, Baby Boojum, in which a kidnapping goes hysterically wrong.