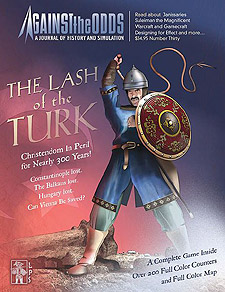 Against the Odds: The Lash of the Turk

With the fall of Jerusalem, Europe learned a new synonym for fear—"the Turk." Organizing the Muslim forces with discipline and training, the Turks recaptured the Holy Land, seized much of Asia Minor, and spread into Europe like a slow tide. Presuming extreme cruelty, European leaders called for new crusades, to free fellow Christians from "the Lash of the Turk." This game covers a time in history when all of Christian Europe felt threatened by Turkey's greatest sultans. Would Hungary be the Turk's next prize? Would Vienna follow, and resistance collapse entirely?

Game rules stress ease of play, but give players lots of options, including river movement and combat, siege rules, forage, and political turncoats. Four different scenarios depict the strengths and weaknesses of the principle leaders for both sides, along with Austrian, Hungarian, Transylvanian, Tartar, Turk, Bavarian, Polish, and Franconian troops. Can you can hold off the Turks? Can you conquer new lands for Allah? Find out, with The Lash of the Turk.