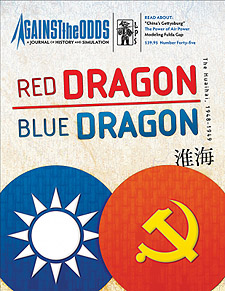 It's amazing that we kow so little about the Chinese Civil War... There are lots of games about the Russian Civil War, but fewer about a conflict that lasted longer, involved more people, and bears greater consequence all the way up until today. (Imagine Taiwan as a "White Russian" enclave with over 23 million people, and we can see how remarkable that is.) The fighting lasted for 23 years! Not even the Japanese invasion of WWII completely put an end to the struggle, nor did battling a "common enemy" bring the two sides closer to reconciliation.

We have heard of Chiang Kai-shek and Mao. After that, many of us draw a blank, nor can we name any battles. This game will study the most important battle - really a series of battles in the most conclusive campaign. While we have heard of the "Long March" and know it somehow saved the Communist forces from disaster, it was the Huaihai Campaign, which effectively won the war. Though the dying would continue for two more years, this campaign fundamentally finished off the Nationalists.

Now, you can explore all the reasons why. Red Dragon, Blue Dragon brings gamers face to face with the series of battles that finally tipped the balance of power towards a Communist victory, with 20km hexes, mostly corps-sized units, and turns representing one week of action. The Nationalist advantages include air support, rail movement, and convoys, while the Communist player benefits from pontoon bridges, guerrilla movement, and "fast marches." Both sides can be affected by random events and there are even rules for units "defecting." Differences like these give each side a distinctive flavor — it's not just red counters against blue counters, but two worlds colliding.

Which one will prevail? You decide.