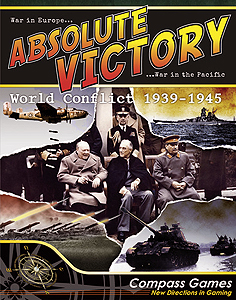 World War II in a box!

Absolute Victory is Compass Games' monster game covering the entire Second World War in every real and possible theatre - Europe, Asia, the Pacific, Africa, the New World, even the Antarctic - and featuring every nation on earth. The forces of democracy, fascism and Soviet communism are arrayed across a gorgeous world-wide map executed by Knut Grunts. The unique "sliding-scale" map allows one seamless worldwide battlefield, giving more detail to areas like Europe and East Asia where the war actually took place, and less where it did not but could have (Siberia, the Americas, sub-Saharan Africa).

The game's many open-ended scenarios and campaign games all focus a player's attention on the military and strategic aspects of the war rather than the "boring stuff." More than 2,500 distinct random Events plunge players into the swirling politics and diplomacy of the wartime 1940s, with the competing agendas of scheming leaders frustrating many of your strategic plans. The mode-based ground combat system lets you prioritize your exact battlefield objectives like a real strategic commander, balancing your concern for time, territory and casualties in every battle. The pulse system of play ensures almost no down-time for the non-phasing player. Production rules are simple but realistic and do not involve any "bean-counting" of production points.

Designed by the Charles S. Roberts Award-winning design team of Ben Madison and Wes Erni, Absolute Victory puts players into the leadership experience of war, in a comprehensive, historical, fun and playable treatment of the greatest conflict in human history: the Second World War.