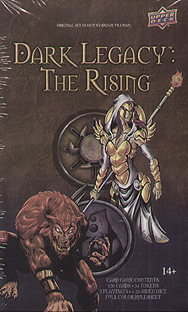 Welcome to planet Titan; a war-torn world where arcane magic clashes with advanced technology. You've entered a land ravaged by the feuding factiions of Chaos, Tech, Wind, Earth, Divine and Darkness, where it's equally as likely to cross paths with a robotic killing machine as it is an elemental creature or celestial being of mystical power. Join a faction and fill your deck with creatures, weapons, armour and spells with this card battle roll-playing game that combines deck-building strategy with the random chance of dice rolling. Level up your cards and bring total destruction upon your opponent, for it is your Dark Legacy.

DIVINE: Representing an echo from Titan's past where spirituality reigned supreme, the Divine faction yearns for a peaceful future. Until that day returns, the devout warriors and celestial beings will put their faith in Hope - a leader who remains sanguine through trials and tribulations.

DARKNESS: The fearmongering Lich Ratakarna commands the Darkness faction as they march mercilessly towards their ultimate goal - that every living soul on Titan is dead. An army of the living dead and their creepy companions is spreading fear and death across the planet and they are dead-set on realizing their lecerous leader's vision.