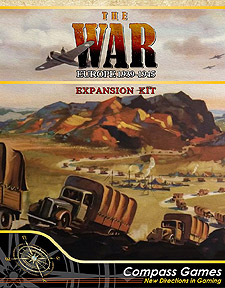 This kit offers a dozen new scenarios, including three big alternative-history scenarios: A Road Not Taken (Hitler does not declare war on the US in 1941, 15 turns); Lord Halifax's Treaty (Britain makes a deal with Germany in the summer of 1940, 18 turns); and The Virtue of Vigilance (France and Britain rearmed early enough to be ready for war in 1939).

The War has always offered gamers a wide variety of strategic choices, but now the kit offers even more. The War gamers will now have dozens of new optional rules, variants, and two new counter sheets to bring to the game. New rules cover Hiwis, Brandenburgers, variable French and Soviet Surprise, new diplomatic targets, and much more. New optional rules will allow players to tilt play-balance one way or the other, as they choose, based on their own experience with the game. For The War gamers, and those interested in becoming The War gamers, the kit offers a whole new range of strategies and a whole new set of what-ifs.