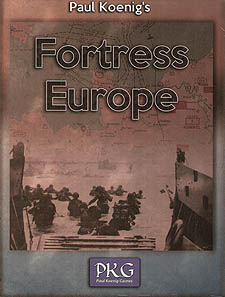 Was £84.99, Now £55.00
June 1944. WWII was in its fifth year, and the German army still controlled most of Western Europe. Field Marshall Erwin Rommel's Army Group B had erected strong fortifications along the coast of Holland, Belgium and France, including the French Mediterranean coast, creating The Atlantic Wall. The bunkers and minefields were backed up by some of Germany's best troops. Allied forces had been gathering in England and the Mediterranean for more than two years, preparing to assault Hitler's Fortress Europe. On D-Day, June 6, 1944, they attacked on what Rommel called "the longest day". Success of the invasion was far from guaranteed, but the Allied victory on the beaches signalled the beginning of the end for the Germans in Western Europe.

Paul Koenig's Fortress Europe recreates the war in Western Europe from the D-day invasion to VE-Day, what General Eisenhower dubbed "the mighty endeavour." As the Allied player you must choose a landing site and then get ashore with a successful landing. This is followed with a breakout of the beachhead and a drive across France, culminating with a deep penetration into Germany itself. As the German player you must choose a wise defensive alignment of your forces, including hidden units, and hope that you are strong enough at the point of the actual landing to defeat the Allied invasion. If you fail at the water's edge yo must conduct an orderly withdrawal across France, constantly delaying the Allies, until you are strong enough to launch a winter counter-attack (historically, the Battle of the Bulge).