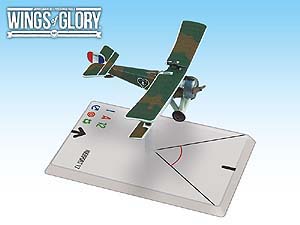 The Neiuport 17 was a nimble fighter, first released in March 1916. Its excellent manoeuverability made a big impact. It soon equipped all of the French fighter squadrons, served as a top British fighter for a year, and was even copied by the Germans! The "sesquiplane" design (a "half" lower wing) gave excellent climb and visibility, but was a weakness in stressful manoeuvres. A favourite of aces, the Nieuport 17 was produced in France, Italy and Russia and used by all Allied armies until late 1917.

NIEUPORT 17 (NUNGESSER)
Charless Nungesser, the glamboyat pilot, preferred Nieuports, even after his squadron switched to SPADs. He survived World War I as France's #3 scoring ace.