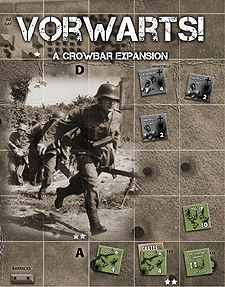 The surprise assault on Pointe du Hoc has caught the German defenders off balance. What was assumed to have been a simple commando raid has turned into a major threat. An effort must be made to regain the initiative and drive the Americans back into the English Channel. You have been tasked with organizing the local Wehrmacht forces and counterattacking the Ranger's perimeter. The Americans must be defeated... and soon! In Vorwarts!, you will be playing as the various German ad-hoc forces that are tasked with attacking the Ranger units and removing them from the Pointe du Hoc promontory. The gameplay is basically the same as in Crowbar!... push your units against the enemy in order to accomplish certain goals. But his time, you'll be attacking with the more fragile Wehrmacht forces and without very much heavy weapon support.

There are two new scenarios included in this module:

In "The Wehrmacht Strikes Back", you will play as the Grenadiers of G.R. 726 as you launch the initial late-afternoon attack, making the first serious attempt at driving the Rangers back into the sea late in the day on June 6th.

In "The Night Assaults", you will take command of G.R. 914 and attempt to find, infiltrate and destroy the Ranger perimeter in a series of vicious night assaults. Time is short and the stakes are high!

Also included in this module are four new scenarios for use in the basic Crowbar! game. All represent shortened games so that you can play faster and from varying points of view.