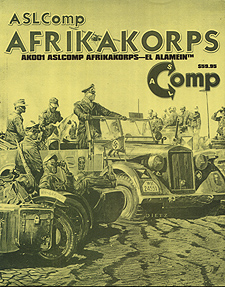 El Alamein, Egypt, 25 October 1942: Things heated up in the Kidney Ridge sector soon after first light on 25 October. British units began to feel for German defended localities, behind the minefield 'battle outposts' were Rommel hoped to destroy whatever enemy elements that succeeded in penetrating his Devil's Gardens. His first move came in the form of a successful deployment of the Pakfront. The British overnight attack on Point 33 was stopped cold when six leading Shermans were shot up by the anti-tank screen. Von Thoma then began the next step in the effort to throw back the British attack. The entire sector of 1st Armoured, including the fire that resulted in 'terrible carnage' of 7th Rifle Brigade in the Australian infantry positions, was targeted by heavy German shelling. After German command tanks probed forward at noon the whole frontage of the Kidney sector was struck with numerous, but poorly coordinated, armoured attacks, mounted by 15th Panzer and the Littorio Division. In a tactical sense all the usual German skill was in evidence; but the attacks were made piecemeal, at varying places and at different times. All failed and led to considerable Axis losses. The last and heaviest attack was mounted with fifty-five tanks and fell upon the 9th Lancers and the Bays, the latter down to only three Shermans. Nevertheless, the attack was defeated decisively, the Germans leaving the field after losing eighteen tanks. These were the first of many reversals Rommel's panzers would receive in the Kidney sector...

ASLComp Afrikakorps is a series of scenario packs that deliver unheralded desert warfare action for ASLers interested in the ultimate test of tactical-level warfare. All of the scenarios in the set are played on 22" x 34" desert mapsheet using a large collection of new colour overlays to create unique and interesting battlefields. All overlays are blunt cut,there are no hexsides to trim our or fray. What's more, the overlays include desert tracks and villages, making for the most realistic desert battlefield recreations in the history of ASLCComp Variant gaming... and then some!

This is not a complete game. Ownership of the ASLRB, WOA (i.e., British, German, American and Italian Nationalities) are required.