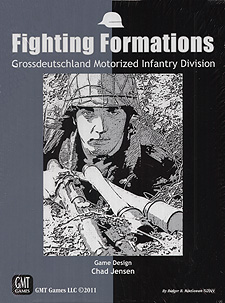 Fighting Formations is intended to be an ongoing series of wargames covering WWII tactical combined-arms combat at the platoon and squad levels. The purpose of the series is to closely examine different fighting formations in a variety of combined-arms and terrain settings at a scale above the 30-40 meter level and below the 150-200 meter level using a unique phaseless approach to command and operations.

Each game in the series will feature a distinct combat unit, highlighting battles in which that unit participated as well as its particular order of battle and fighting characteristics. The first title in the series is Grossdeutschland Motorized Infantry Division (FF:GD), which presents this divison in ten scenarios engaged against Soviet forces in Russia and Ukraine between July 1942 through the middle of March 1943. Two scenarios are half-map size, six scenarios are full-map size, and two scenarios are double-map size, giving players a range of engagement sizes to examine formation tactics for both sides. Game Flow: In each scenario, one player will take command of elements of the featured unit, while the other assumes control of the opposing forces. These two players will alternate giving orders, activating their units on the map for various military functions. Players attempt to achieve victory by moving their combat units across the game map to attack their opponent's units and to achieve as many scenario objectives as possible. The degree to which a player succeeds or fails is measured by a scenario's specific victory conditions - be it the destruction of enemy units, the taking of vital mapboard objectives, or the exiting of friendly units off the opponent's map edge. Game Contents:
Review Game There is no review for this game at the moment why not be the first to review it.