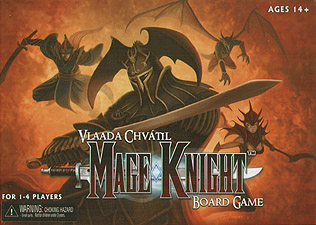 A Game of Epic Exploration and Conquest

The sun is setting on the first day of your march across a land that borders on the familiar. You scale a hill and watch as the light in a village to the west go out, one by one. Mortals need sleep, but as a Mage Knight you do not feel the slightest bit fatigued, despite your earlier encounter with a small group of marauding Orc Khans. Turning north, a great Atlantean city glows on the horizon...

The Mage Knight board game is an epic game of exploration and conquest. Take control of one of four powerful Mage Knight Heroes and play a variety of competitive and cooperative scenarios as you vie to build your own personal legend. Conquer a mage tower and learn potent Spells, explore a dungeon and discover a priceless Artifacts, or assault a keep and recruit powerful Units to fight for your cause! Level up as you progress through each journey and carefully build your Action deck and Skill set for the mission at hand. Each decision you make will impede or improve your ability to accumulate Fame, acquire legendary loot, and position yourself as the Mage Knight best suited to accomplish your task. After three Days and Nights of adventuring, combat, and conquest, only the Mage Knight of greatest acclaim will be declared the victor!