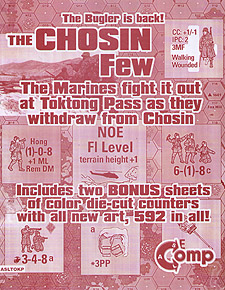 Tokong Pass, Korea, 1500 Hours, 29 November 1950: Fox Hill was taking sniper fire from the woods to the southwest. Captain Barber ordered Lieutenant Dunn to take his platoon and eliminate the snipers. Taking 1st Platoon down the hill, into the valley and back up again and clearing the woods was the plan, and then get back into the perimeter as soon as possible. After finding two snipers, the woods were cleared without any losses. But as they started to move up the hill on the other side of the woods, the Lieutenant spotted a group of CCF, moving to the hill as well. He pushed his men to reach the top of the hill before the CCF. Lt, Dunn pushed 1st Platoon to secure the top of hill 1479 before the CCF units. They did not reach the summit before the enemy, and a hand-to-hand battle at the top of the hill ensued. After a short firefight, the CCF withdrew to the sound of bugles and horns...

Toktong Pass II - The Chosin Few is a detailed ASLComp variant that tells the story of the Korean War from the perspective of the men of the 1st Marine Division, retreating from the Chosin Reservoir in the face of a massive onslaught by Chinese Communist troops. The Marines knew there was only one way out from Chosin, and that was to fight their way out, outnumbered and amidst some of the most hostile terrain on earth - harsh, hilly and frozen. The Marines could only bring their superior elan and small arms to bear against an enemy determined to annihilate every American soldier north of the 38th Parallel. Frostbite was an indiscriminate enemy while every hilltop captured by the Chinese had to be re-taken, every breach in the Marine perimeter repaired by force, without delay.

NOTE: This is not a complete game. Ownership of Beyond Valor and Gung Ho is required to use this product.


Review Game There is no review for this game at the moment why not be the first to review it.