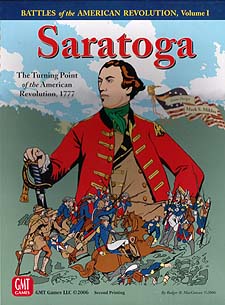 In all the spectacle of war there has seldom been a sight the equal of British General Burgoyne's campaign of 1777. The float and march south from Canada had almost a surreal quality juxtaposed against the Adirondak wilderness. Hundreds of vessels making up an immense inland navy on Lake Champlain transported nearly 9,000 combatants together with 138 cannons. Burgoyne's objective was Fort Ticonderoga and from there Albany and a rendezvous with British forces coming from New York City. The strategic purpose of the campaign was nothing short of an end to the American Rebellion.

The intrigue on the American side lay in the cult of personality. Saratoga was to be Benedict Arnold's greatest victory in a string of successes which rank him among the finest field commanders of the era. It is the 19th of September, 1777. The fate of the American Revolution hangs in the balance. Do you, as the British, attempt to storm the prepared American positions on the high ground at Bemis Heights for the approach of the enemy, or do you sortie and meet the British in the forests where their artillery will be of little value? Historically, the Americans sortied, and the fighting at Freeman's Farm would be savage. Here the Continental Regulars stood toe to toe with Europe's finest with both sides losing heavily. Next Day Scenario The Battle of Freeman's Farm was a marginal British victory but the strategic situation remained unchanged. Gates, in superior numbers and on prepared ground, was still astride the only road to Albany. Burgoyne saw no real flexibility in his orders. He had to press the attack and intended to do so the very next day. As it happened Burgoyne was convinced by his staff to delay the offensive for 24 hours during which time Clinton's coded message arrived from New York. An imperfect reading of that message suggested Clinton was on his way with a relief column when in fact all he planned was a diversion against the Hudson Highlands. Burgoyne decided to suspend forward movement, dig in, and wait for Clinton. The 2nd Edition of Saratoga allows gamers to model the possibility of a renewed British attack on the next day. This Next Day Scenario begins with reduced and eliminated units from the previous day's fighting. The scenario contains 12 new units: Six British and six American. Other features of the 2nd Edition Saratoga include updated counters, the elimination of map ambiguities, and separate Series and Exclusive rulebooks. History awaits you. Game Features
* Set-up in 5-minutes, play in 2 hours, & ideal for tournament play.
* Each side can aspire to 3-levels of victory each.
* Random player order assures variability of play.
* Army morale track measures tenacity & will to fight.
* Gates-Arnold controversy, with variants.
* Unique capabilities for rifle armed units.
* 8-tactics chits with restrictions to gain close combat modifiers.
* Leaders: Gates, Arnold, Morgan, Burgoyne, von Riedesel, Lincoln, Warner, Phillips and Fraser.
* Basic - Advanced - and Optional Rules formats.
* Campaign Scenario and an all-new Next Day Scenario. Game Contents:
* One 22" x 34" full-colour mapsheet
* full-colour 5/8" counters with replacement counters for Eutaw, Guilford, Brandywine & Savannah
* Series and Exclusive Rules Books with Historical Commentary
* 2 Ammunition Depletion Rosters
* One ten sided die Review Game There is no review for this game at the moment why not be the first to review it.