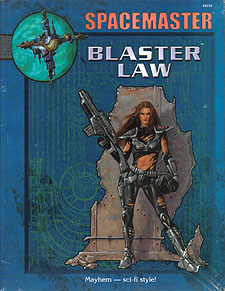 Eric stumbled to the side, his numb barely-working fingers fumbling for an energy cell. The laser fire stopped for a moment as his opponents waited for him to show himself. They wouldn't give up their cover. They'd wait for him to move.

After several, agonizing seconds, he managed to slide a new power cell into his blaster. The burns along the left side of his body made the slightest movement agony. His muscles twitched spasmodically, as nerves died. His burned flesh twitched as it cracked and flaked away. This was bad. He took a deep breath and checked his blaster's setting. There was no room left for tactics. He could make a final charge on continuous fire. If he was really lucky, he might live long enough to kill one of his foes. Maybe two. It was either that or wait for his life to ooze out half a dozen small laser wounds. Screaming with more bravado than he felt, he swung around the corner, firing wildly. Beams of coherent light began seeking him out as he charged headlong, his blaster pulsing in his hand. Revel in MORE POWER! Blaster Law is the complete guide to energy weapons and their use in combat. Spacemaster: Privateers has a ton of combat and power but Blaster Law takes this to the max, expanding directed energy weapons. It uses a tech level system and gives complete weapon creation rules, for use with anything from primitive spacefaring worlds to power weapons invented by worlds on the cutting edge. Blaster Law includes: * 12 Laser Attack tables
* 13 Blaster Attack tables
* 10 Plasma Weapon Attack tables
* 5 Sonic Stunner Attack tables
* 20 Critical and Fumble tables Review Game There is no review for this game at the moment why not be the first to review it (you never know you might win a prize)?