As you will expect, there was not a lot of racing done this year – just one meeting, with the CRMC at Darley Moor in late August. The club had run a meeting at Cadwell Park a couple of weeks earlier, but Sally and I had been quite busy during lockdown, with no staff and plenty of mail order to sort out, plus urgent house repairs to do in the eminently suitable weather, so the bikes were still being worked on. Most CRMC members arrive with immaculately prepared bikes even without three months of enforced polishing time – in contrast, I has straightened or re-made the bent bits on the 500 Morini but was struggling to match the paint colour for the patched-up fairing, and while I had managed to knock out the dent in the tank to some extent, it was still there. The Cub was checked over and run up on the dyno, which as things stand does not give a power readout, but does give a consistent, if inaccurate, top speed reading. This allowed me to experiment with the ignition timing and I was satisfied that it was going as well as it could, but was still going to be left for dead on the long uphill straight. And it happily showed that rebuilding the gearbox has cured an unexpected problem that arose last year.

The 175 Morini that friend Paul had lent me to sort out as a hoped-for Cub replacement was also put on the dyno after a very thorough carburettor clean and wiring check as it had been holding back intermittently on its first try last year. It was running cleanly but, disappointingly, had a lower top speed than the Cub. The Daytona had been put back in road mode, modified to be more comfortable for Sally riding pillion, but a test ride showed that the sitting position is still not really what is required these days, so the race tyres went back on, the lights and numberplate came back off, and it was ready for the track – apart from a continuing tendency to jump out of third gear, and like the Cub it really isn’t fast enough these days. So, to the vexed question of the 500 Morini. The electric starter rollers were refusing to co-operate, the battery is OK but the motor is no longer up to the job. There is a chap nearby whom I had met once or twice who used to race but is now far from fit; I looked him up, took the Morini round in the van and between us we got his petrol-powered starter in position and fired the bike up. Hurrah! It started, running fairly cleanly on both cylinders. He agreed to come to the circuit on the Sunday together with a fitter younger friend to operate the starter. So on the Friday Sally and I set off to Darley Moor with the Cub, Daytona and 175 Morini, found a good spot with a tree to tie the bike tent to and good ground for hammering in plenty of pegs, as it was blowing a serious gale. 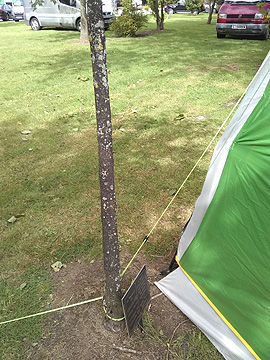 Queueing up to sign on – the usual long line with lots of riders to process – I was nearly blown off my feet several times, and hoped that it would abate by the next morning as it would it would have been dangerous – probably too dangerous – to race. Scrutineering followed, which was carried out with exemplary efficiency despite the extra conditions imposed by Covid regulations, so we got all three bikes done and tucked up in their tent in time to be home for tea. 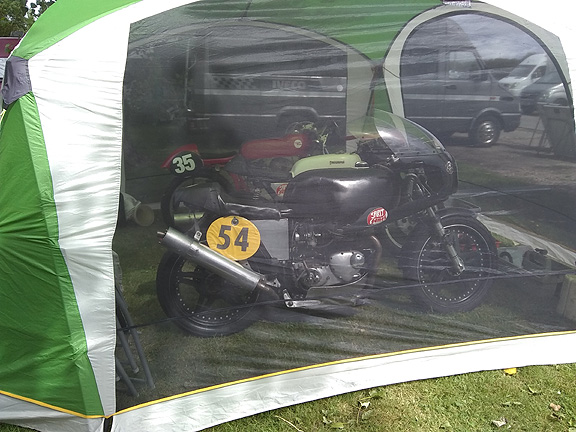 Come Saturday morning the wind had died down and the rain was holding off. The noise testing was carried out quickly and efficiently with none of the faffing about which has inexplicably been the norm for the last 10+ years. It is a time-critical operation as it has to be carried out before you can go out for practice, which has strict time slots; with two teams of two performing a well-practised routine you can get up to four bikes done per minute, the most extreme case of the opposite happening was at Brands Hatch one year when the circuit organisers had arranged for it to be done by one teenage girl, who was on the phone to her friend while 40 bikes had increasingly hot engines running in the queue. I then went out for practice on both the Cub and the Daytona, a rare pleasure. There was good news in that the elbow broken last year did not complain, and of greater concern, the zip on the leathers held up under the strain. I was far from the only one whose leathers appeared to have shrunk during lock-down! Also, the Daytona gearbox problem had much improved, for no apparent reason. 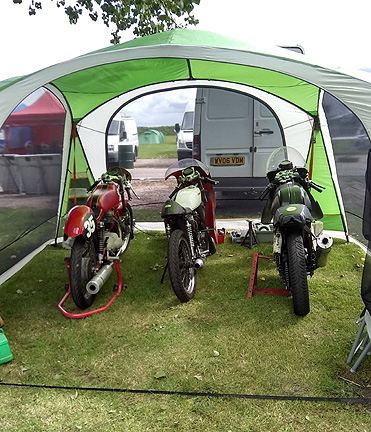 A bright morning and ready to go.

Grid positions for the races were determined by practice times, so having the slowest bikes, I was close to the back, but there were a couple of people even more race-rusty than I was. This at least gave me the opportunity to avoid last place by outbraking a 250 TZ on the last bend after it came whipping past on the straight every lap. The first race on the Cub proved embarrassing, as I knew that I had to make up several places on the wiggly bits before losing them again on the straight. I therefore left the braking good and late on the first bend, only to find that, in extremis, the brake was not up to the job. Thankfully everyone avoided me, doubtless uttering curses and asking themselves what this idiot thought he was doing, as I went almost straight on to eventually stop just on the grass while everyone disappeared into the distance. Mental note made to let it warm up a bit before trying to brake that hard.

For the next 200cc race I used the 175 Morini which stopped well, but was nowhere near fast enough. In the Daytona’s second race, the guy on the TZ had remembered that he was on a proper race bike and finished ahead of me. I did have a good dice for a while with a 500 Yamaha, but he too pulled ahead in the end. No real excuse for me there as we were side by side down the straight. In between races the hunt was on for a tyre for the 500 Morini – there was no way I was going to risk using the tyre that proved so disastrously bad in the wet last time out, with Darley Moor weather always unreliable (except when it is reliably wet). I found one going cheap from one of the posh teams where they change the tyres every few meetings – it had the soft compound I wanted and was manufactured just last year. All I had to do was take the 175 back home at the end of the day, take the back wheel out of the 500 Morini, change the tyre, get the wheel back in, and load it into the van before it got too dark. Then up early in the morning to finish changing the racing numbers and get to the track in time to get the bike scrutineered and noise tested.

The chaps with the starter arrived; we were all set, but we had the complication of the two race classes being one after the other, and the organisers were allowing barely enough time to swap from one bike to the other. So I pulled in early from the Cub races, especially as I had another brake failure incident. I moved up a few places through the first wiggly bits, then coming into the hairpin two of us were outbraking a rider, one each side, with time slow down further without pushing my luck too far with the now warmed up brake. Alas, the other rider swung over unexpectedly early so really hard braking was needed – in the event I slowed down by bouncing off the other bike. We both stayed on, but lost all the ground we had made, so back to the back again...

Finally, could I get some sort of result on the Morini?

The problem of cutting out when banked over after hard braking did not rear its ugly head to too great an extent at the hairpin, but came back with a vengeance at the final bend before the finish line, at the end of the straight. I was dicing with an astonishingly fast T500 Suzuki – he would come past on the straight, I would get ahead going into the bend, then one cylinder would cut out and he would come past again and hold me up through a series of wiggly bits. I got him in the end, but it was too late to get up with the group I would normally hope to be with, finishing 4th out of 6 finishers in my class, with the TZ’s of the full race classes ahead of all of us as appropriate.

In the final race of the day, it started raining a bit, so armed with my nice new tyre I had hopes of doing better. But instead, after moving up a few places into the first bend, the bike refused to change gear coming out of it and I was back to battling with that pesky Suzuki and this time he beat me in the end. The gear change had always been a bit stiff but was now much worse, and my big toe took three weeks to recover afterwards. Sorting that gear change is alongside stripping and cleaning the Cub’s front brake at the top of the to-do list.

So, I had been out to race again after recovering from last year’s injury, but I was looking alarmingly like a sad old git trailing around at the back. There were some parts of the circuit where I was definitely not brave enough, but others where I was getting properly stuck in, and I am confident that I could still do well at Cadwell Park or Brands Hatch. There are some fresh ideas about what may be wrong with the Morini, Luton Paul is working on uprating the starter rollers, and I will not have the shop to make going away at weekends difficult, so I aim to be ready for whatever strange world we will inhabit in 2021. Hopefully it will still include some bike racing.