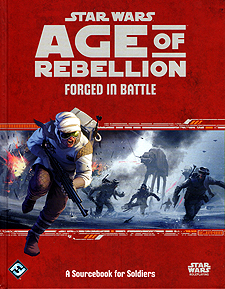 The Alliance to Restore the Republic rests on high-minded ideals, but its battles must still be won in the trenches. The Rebellion's troops go into every battle outnumbered and outgunned. Against long odds, they must use their cunning, their skill, and their courage to ensure that hope persists for one more day in the galaxy.

Take the fight to the Empire in Forged in Battle. This sourcebook expands upon the Age of Rebellion Roleplaying Game presenting new options for Soldier characters as well as any other characters interested in standing on the front lines in the Star Wars galaxy. Wield powerful weapons, face dangerous odds, and strike a blow for the Rebellion!