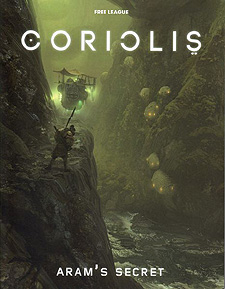 Amali cursed his arrogance and stupidity - he shouldn't have gone this deep. Only the Kalites go this close to the bottom of the ravine. and even they prefer their dwellings higher up. It had all sounded so simple back at the cantina: a short detour into the lower ravine to meet up with the smugglers' barge and load the goods.

But nothing is ever simple on Jina.

A faint light pierced the green mist in the air - a gravcraft, finally! Then, he heard the gravel shift a few steps down in the mist and froze with fear. What if the stories were true? What if the bottom of the ravine actually was home to djinni? He braced himself and looked down - nothing. He breathed a sigh of relief and tried to stop shaking. Maybe this could work, after all.

But nothing is ever simple of Jina.

The acidified planet Jina is widely considered as an uninhabitable hell hole. Despite this, a hardy mining colony known as Aram's Ravine persists underneath the heavy clouds. Most travellers and traders in these parts choose the luxury resort moon Cala Duriha instead, and only the most desperate descend through the toxic atmosphere to visit the ravine. Fate forces the PCs down to the planet, however, where the plot soon thickens around them.

Contents of this book: