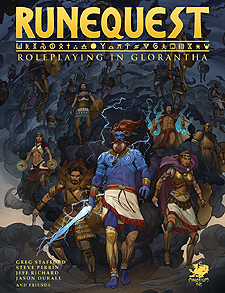 Glorantha is the mythical world that can be found on the Other Side of our consciousness. First discovered by Greg Stafford over fifty years ago, Glorantha has been explored in such games as White Bear & Red Moon, Dragon Pass, RuneQuest, HeroQuest, and King of Dragon Pass.

Try out a skill-based percentile system that balances experience-driven progression with deadly combat!

The core rules of RuneQuest are essential for players and gamemasters, as they contain all the rules for character creation, starting homelands, background history, professions, skills, starting Runes and magic, and the cults and gods whose influence will define your character's activities. Further, the rules for character advancement are contained here, for the times between adventures.

The RuneQuest: Glorantha Bestiary contains almost 200 creatures native to the world of Glorantha or in the spirit worlds adjacent to it. These creatures range from weak to apocalyptically powerful, allowing a RuneQuest gamemaster to choose the right creature to suit any encounter or need.

The RuneQuest Gamemaster Screen Pack is an essential play aid for RuneQuest: Roleplaying in Glornatha gamemasters, packed with useful references and materials to launch any new campaign, or add to an existing one. The gamemaster screen is a four-panel cardboard screen with a gorgeous illustration of the famed Gods Wall facing the players, and all manner of important references and summaries of key rules on the gamemaster's side. Included with the screen is a 128-page Adventurers Book, a 20-page booklet full of charts and references for ease of play, a 16-page Gloranthan calendar, seven ready-to-play pregenerated adventurer characters, regular and deluxe adventurer sheets, squad and non-player character sheets, as well as full-colour fold-out maps of Apple Lane, Clearwine, Dragon Pass, and the world or Glorantha itself.