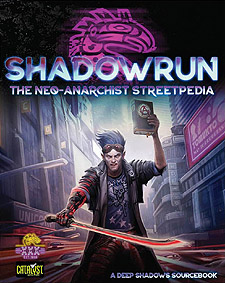 They're all here. everyone of them. The legends, the liars the betrayers, the winners, the craven, the brave, the powerful, the downtrodden. The people who leaked secrets and got killed for it, and the secrets that no one has discovered yet. The dark bargains, the shady deals, the desperate manoeuvres. Everything that makes the Sixth World the high-revving nightmare machine its residents know too well is right here between these two covers.

The Neo-Anarchist Streetpedia is your definitive guide to the Shadowrun universe. With hundreds of entries, it covers corporations, shadowrunners, politicians, nations, cities, criminal organization and more. Even better, it gets to the point and tells you what you need to know now so you can hit the streets a little smarter than you were when you woke up this morning.

The Neo-Anarchist Stteetpedia is for use with whatever form of Shadowrun you play. Don't play Shadowrun? Read this, learn about the Sixth World and then find a game to dive into!