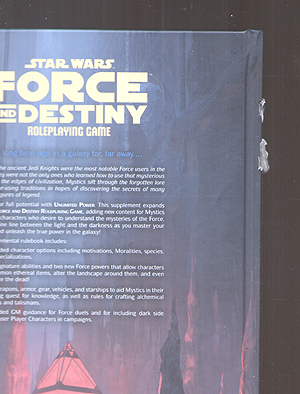 Unlimited Power: A Sourcebook For Mystics

Although the ancient Jedi Knights were the most notable Force users in the galaxy, they were not the only ones who learned how to use that mysterious power. On the edges of civilization, Mystics sift through the forgotten lore of all Force using traditions in the hopes of discovering the secrets of many powerful figures of legend.

Unlock your full potential with Unlimited Power. This supplement expands upon the Force and Destiny Roleplaying Game, adding new content fir Mystics and other characters who desire to understand the mysteries of the Force. Walk the fine line between the light and the darkness as you master your abilities and unleash the true power in the galaxy!