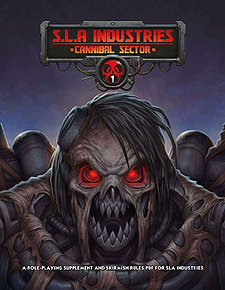 Salvation Tower was a beacon of hope, prosperity and the future, a promise that could never be fulfilled. The bad times began with the collapse of the tower, ringing on the blackout that never ended. The walls came up and Mort City closed its doors. Outside the city's protection the land changed and Cannibal Sector 1 was born, and now, six hundred years on, it's time to venture beyond the walls to reclaim what was lost. It's time to take back the sector for SLA Industries.

After one failed attempt, the Bellwood Campaign seeks to redress the balance. The Shivers are sent out once again, only this time they meet the full horror of the wastelands. Taking the sector back means uncovering all of its secrets, something that comes at a price.

p> The most deadly threat when seeking the truth is that sometimes it finds you first.

SLA Industries: Cannibal Sector 1 is a role-playing supplement for SLA Industries and a stand-alone skirmish game that tells the story of the most famous and deadly of the cannibal sectors outside Mort City. Digger awaits.