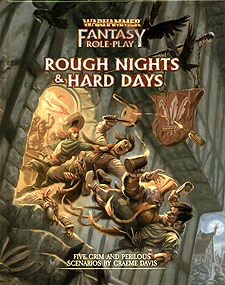 Let me tell you of the Gravin Maria-Ulrike von Liebwitz of Ambosstein, and her deadly quarrel with Baron Otto von Dammenblatz. It's unlike any tale told before, a truly epic drama to astonish and amaze, featuring evil witches, profane daemons, deceitful assassins, and murder most foul. And, of course, the best draw of them all: an evening at the opera with the Grand Countess of Nuln as Detlef Sierck, the finest actor the Empire has known, entertains us all on stage! This is a story worth the telling, so draw close, and let us begin...

Rough Nights & Hard Days contains five phenomenal scenarios for Warhammer Fantasy Roleplay, written by WFPR veteran Graeme Davis. These exciting adventures can be played individually or combined into an epic five-part campaign, where our bold heroes become embroiled in a bitter dispute between two quarrelling noble houses as they clash across the Reikland. Rough Nights & Hard Days also introduces an entirely new playable species, Gnomes, and presents a variety of pub games to amuse even the most hard-bitten adventurer.