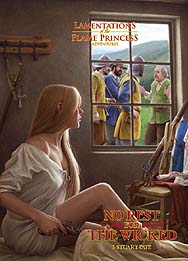 No Rest for the Wicked

THE YEAR IS 1632 AND THE WARS OF RELIGION ENGULF EUROPE

Can you imagine it? A war so total, everywhere you have ever known and everywhere you might know is touched by it. It's taken friends and family members. Maybe it swallowed your village whole. Perhaps it even took you, conscripted by a King or an Emperor or a Pope you have never met.

So, when you seek an inn to stay for the night, why are you so surprised to find the war has arrived ahead of you?

An adventure suitable for low level characters for use with Lamentations of the Flame Princess Weird Fantasy Role-Playing and other traditional role-playing games.