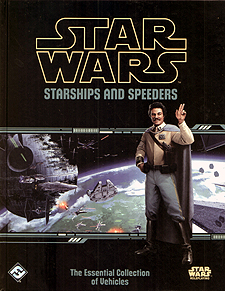 The Essential Collection of Vehicles: Starships and Speeders

With the Galactic Civil War raging, the Empire and Rebel Alliance fight their battles on planetary surfaces and in the depths of space. From the Empire's superweapons to the repurposed civilian craft of the Rebel Alliance, vehicles bring the fight to every conceivable environment. And as always, traders, smugglers, pirates, and more rely on vehicles and ships to ply their trade.

A galaxy of vehicles awaits in Starships and Speeders! This sourcebook collects ships from all three Star Wars roleplaying game lines and introduces a number of vehicles never before profiled. From civilian speeders to mighty battleships, you'll find a suitable vessel for any situation that might arise in your game. Starships and Speeders>/i> is fully compatible with Edge of the Empire, Age of Rebellion and Force and Destiny.