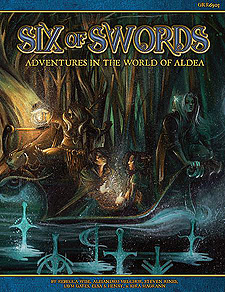 Sword for the Queen!

Six of Swords is an adventure anthology for Blue Rose, the AGE Roleplaying Game of Romantic Fantasy. Set in the fantastic world of Aldea, these six adventures are suitable for different levels of characters, and also intended as examples and resources for Narrators.

The adventures in this book include ruined mansions, masquerade balls, vampiric curses, mysterious masks, sorcerous secrets, ghostly hauntings, lost loves, looming threats, and tragic quests where heroes are called upon to make the right choices. Six of Swords has hours of adventure, excitement, and entertainment for your Blue Rose game.

The Kingdom of the Blue Rose needs heroes...

Will You Answer The Call?