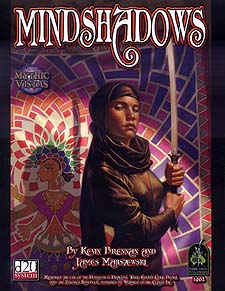 In Naranian, the Mind is Stronger Than Naked Steel...

On the distant island-continent of Naranjan, brave adventurers study the psychic arts under powerful gurus, battle treacherous yuan-ti in the depths of ancient dwarven ruins, and evade elven cannibal tribes in the tropical jungle. Third in the Mythic Vistas series from Green Ronin, Mindshadows blends the rich legends of Southeast Asia with furious martial arts action inspired by the Psionics Handbook. Mindshadows features:
* The history of Naranjan, from the Mythic Age to the present day.
* 13 prestige classes, including the guru and serpentine assassin.
* A setting map and gazetteer.
* Over 30 feats, including psionic feats like Warrior's Trance and Weapon Bond.
* Advice on running Mindshadows campaigns.
* Full details on the races and cultures of Naranjan, including castes, religions, and more.
* The truth about serpent people and yuan-to revealed.
* New equipment, including weapons, armour, and the dreaded juggernauts.
* Conversion notes for using the Mindshadows system.
* Full Compatibility with Green Ronin's Freeport, Master Class, and Races of Renown lines, and the companion volume to Mindshadows, Monsters of the Mind. The first true psionic setting for the d20 System, Mindshadows can be dropped easily into any existing campaign. From the decadent city-states of the Spice Coast to the treacherous capital of the Sudarshan Empire, adventure awaits - for those brave enough to traverse this exotic land. Requires the use of the Dungeons & Dragons, Third Edition Core Books, and the Psionics Handbook. Review Game There is no review for this game at the moment why not be the first to review it (you never know you might win a prize)?