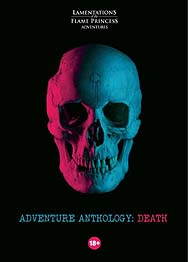 You wander through life pretending death will never come, and when you do think about your end you hope it will be swift, that you will not be able to mentally grasp the process of your demise as it happens. But you will, your consciousness remaining active from the point you realize that the end is coming all the way through those long, long moments until the electrical activity in your brain finally, mercifully snuffs out... long after your other physical processes cease. For a time you will be aware of being a dying brain inside of an already deceased body, its diminishing functions being received as intense pain and panic. It will feel like forever as you silently scream to be saved. But no help will ever come. And then your body will rot, your consciousness extinguished utterly, everything that you ever were gone forever.

This is our reality. And yet, as members of a civilization in which we fight for comfort rather than survival, we have the luxury to imagine fates even crueler still. For our amusement.

As all good horror must.

The volume collects Tales of the Scarecrow, The Magnificent Joop van Ooms, Fuck For Satan, and Death Love Doom,, four adventures previously only available in print as limited editions. For use with Lamentations of the Flame Princess Weird Fantasy Role-Playing and other traditional tabletop role-playing games.