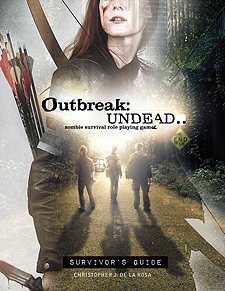 Society has been destroyed, humanity has turned on itself. We are left to piece together a new life in a world infested with horrors, both LIVING and UNDEAD.

In this Second Edition to the award-winning Survival Horror roleplaying game, Outbreak: Undead... ordinary player become SURVIVORS attempting to thrive in a frightening new world dominated by horrors. From gas-guzzling raiders to hordes of relentless undead; players must use their intuition with a dose of grit in order to survive. Hunt down whatever resources you can to survive in this world and find your Stronghold!

The Survivor's Guide will provide players with all the essentials needed to start an adventure in your post-apocalyptic campaign. Whether you're looking for a single hack-and-slash or a bone-breaking level of immersion; Outbreak: Undead... Second Edition features three compatible levels of rules to help players get into the game quickly and provide the ultimate realistic role-playing experience.

What will you do?

SURVIVE to outlast the overwhelming forces? REBUILD to create a new world worth protecting? Play YOURSELF as a character?

Death in the world of Outbreak Undead isn't about IF, but WHEN. So the question will be - what will you do with the precious time you have?