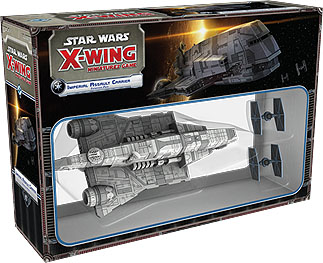 Snuff out the spark of Rebellion!

The Gozanti-class cruiser was a versatile freighter used by various organizations across the galaxy. Imperial engineers added docking clamps to the ship's design, allowing the freighter to carry its own complement of escort fighters. The Gozanti also wields a pair of twin laser cannons making it an extremely survivable and capable armed scout ship.

Tgis pack contains everything you need to add one Gozanti-class cruiser and two TIE fighters to your game. Also featured are upgrades for the Gozanti's signiture docking clamps, ISB officer Agent Kallus, and a mission-driven campaign focused on a Gozanti crew tracking down a rogue band of dissenters. In addition to these cinematic missions,Imperian players can field the Gozanti in Epic Play format, allowing formassive fleets to face off in large-scale space battles.

Deploy Imperial might!
Bring additional reinforcements into battle by attatching up to four TIE fighters to the Gozanti-class Cruiser@s docking clamps!