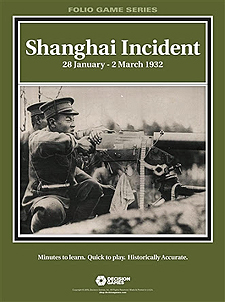 A faction of the Japanese military had been looking for an excuse to extend Japanese control deeper into the Chinese mainland. When several Chinese monks were beaten, this faction paid thugs to fan anti-Japanese activities in the Chinese sector of Shanghai. Seizing the "opportunity," a small force of naval infantry invaded Chapei, the all-Chinese northern section of the city of Shanghai. But the Japanese had not counted on the quick reaction and effective fighting of the Nationalist Chinese forces from nearby Nanjing. The initial Japanese thrust was thrown back quickly. It took repeated reinforcements over the next five weeks for the Japanese to push the Chinese out of the city and away from the Huangpo and Yangtze Rivers. Shanghai would become a major springboard for further Japanese advances, but the battle had taken its toll. This game covers those five weeks of fighting.

Shanghai Incident uses the Fire & Movement system designed around the realities of mechanized warfare, giving motorized and/or specially-trained units clear advantages. Players can augment units at the instant of combat with support fire, provided by weapons ranging from mortars through cannon and light ground attack aircraft to heavy bombers. A seemingly predictable assault can be overturned at the last minute by heavy defending fires, while even small units may develop tremendous offensive punch with the assistance of a heavy bombardment. Winning the battle is a matter of manoeuvre, firepower and asset management.

The Japanese military has greater overall skill and firepower, although the Chinese have two German-trained divisions. Both players have manpower limitations that are eased only when the Japanese player calls a pause to his offensive. Both sides therefore have to weigh time and space against numbers. The player who strikes the best balance will emerge the victor.