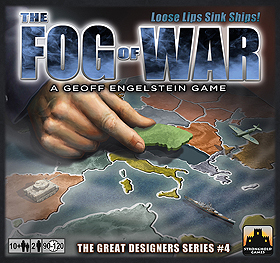 The Fog of War

For months you've been planning and gathering forces for the largest invasion of the war. Your opponent knows that you are preparing a major strike, but do they know where? Suddenly you receive reports that a spy has gained information about your operation, and the enemy shifts their defensive forces. But do they know the full extent of your plans? Should you call off the invasion and plan for a new attack? Or risk disaster against a prepared enemy? This is The Fog of War...

The Fog of War is a two player grand strategic game covering the European theatre of World War II. One player plays the Axis forces and the other the Allies. The game focuses on the planning and intelligence aspects of the war, not on tactical unit movements, making this unique among other WWII games.

Each player has a deck of cards that represents the army, navy, and other assets of their nations. The map shows the 28 land and sea provinces over which the players are battling. Provinces are defended by placing the nation's cards face down in spaces around the map.

To attack a province, players must plan an Operation on the "Operation Wheel". The Operation Wheel is a unique way of forcing players to commit to Operations in advance, just as in the actual war, while giving opportunities for intelligence gathering and bluffing. An Operation consists of a Province card showing the target of the Operation, plus other cards to conduct the attack. Cards are played face down, so your opponent does not know the target or strength of the attack.

Each turn the Operation Wheel is rotated one position. This controls when an operation can be launched and any attack or defence bonuses that apply. Intel tokens can be played, allowing players to look at their opponent's operations and defences. Will you see through The Fog of War?

What's in the box: