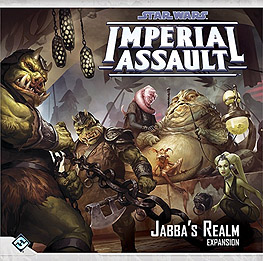 The Illustrious Jabba Bids You Welcome...

The Galactic Civil War carries devastating consequences throughout the galaxy. With innocent civilians targeted by the Empire, Alliance Command has no choice but to mount a relocation mission to a safer world for them. But, when a convoy is shot down over Tatooine, the soldiers need to join forces with the local criminal element and notorious gangster Jabba the Hutt to keep their people safe...

Fight alongside smugglers and bounty hunters in Jabba's Realm! This expansion offers a new campaign with sixteen brand-new missions that explore the seedy underbelly of the galaxy and the world of the nefarious Hutt lords. Work alongside Jabba the Hutt for the welfare of your family as you oppose new forces such as the nimble Jet Troopers, powerful Gamorrean Guards, and even a ferocious Rancor! Meanwhile, the forces of the Rebellion swell with three all new heroes and the heroic Luke Skywalker, while new map tiles, items, classes, and rewards bring you deeper into the Star Wars adventure.