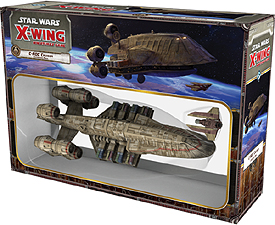 The C-ROC cruiser was a favourite of traders, smugglers, and privateers all across the Outer Rim. Constructed using the same frame as the Empire's Gozanti-class cruiser, the C-ROC sported extra cargo space, three additional engines, and modified armour that gave it a distinctive profile. As the reliable workhorse at the heart of merchant convoys and pirate fleets alike, the C-ROC could be fitted with weapons and equipment for hauling cargo, supporting smaller ships, or flying into the fray to engage enemy craft directly.

This pack includes everything you need to add one C-ROC cruiser and on M3-A interceptor to your game. Also featured are new cargo and weapons, underworld dwellers such as Azmorigan, Cikatro Vizago, and Jabba the Hutt, and a mission-driven campaign focused on a C-ROC crew deciding its loyalty in the Galactic Civil War. In addition to these cinematic missions, Scum and Villainy players can field the C-ROC in Epic Play format, allowing for massive fleets to face off in large-scale space battles!