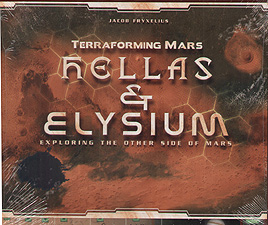 Explore new sites and strategies in Terraforming Mars! Any of these two game boards can be used instead of the original game board. They each depict a new region of Mars, with new placement bonuses, ocean areas, and brand new sets of milestones and awards.

HELLAS
This map shows the south pole as well as the great Hellas sea, all the way up to the equator. The map overlaps the original game board by featuring Argyre Planitia and its surrounding mountains. The map features two new placement bonuses. The first, heat, is found in the Hellas Sea because of the thin Martian crust in this area, as well as around the south pole where frozen carbon dioxide can be released to the atmosphere as a greenhouse gas. The other special bonus is on the south pole itself, requiring you to pay 6 megacredits for placing a tile here, but giving you an ocean tile (along with its terraform rating) to place on any available ocean area.
The Hellas map lacks volcanoes and the Noctis region, so the tiles from the cards Noctis City and Lava Flows lose their placement restrictions and may be placed on any non-ocean area.

requires that you have 8 different tags in play.

ELYSIUM
Here we see the region west of Tharsis, from Olympus Mons, the highest mountain in the solar system, to Elysium Montes. In the north, the great northern lowlands, Vastitas Borealis, reaches down towards the equator, while the south is dominated by its great crater-saturated highlands. The map overlaps the original game board by featuring Arsia Mons. There are no special placement bonuses on this map.
The Elysium map does not have the Noctis region, so Noctis City may be placed without its restriction. It does, however, have four volcanic sites where the Lava Flows tile can be placed; Arsia Mons, Olympus Mons, Elysium Mons, and Hecates Tholus.

requires that you have increased all 6 productions by at least 1 step (starting production from corporation cards counts as increase).

Industrialist - most steel and energy resources