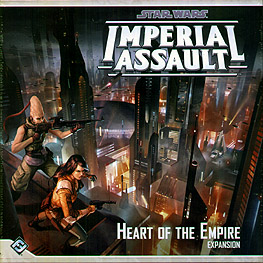 A Brighter Centre to the Galaxy

Coruscant, captial of the galaxy. Once home to the Republic Senate and Jedi Council, it is now the centre of the Galactic Empire and the seat of power for the Emperor. Its globe-spanning metropolis is inhabited by innumerable beings and countless mysteries, among them the location of an ancient artifact of incredible importance. Only the bravest rebels dare to venture into the heart of the Empire...

Experience the awe that is Coruscant in Heart of the Empire, an expansion for Imperial Assault! A new campaign with sixteen brand-new missions explores every level of the city-covered world, from the glistening halls of power to the grimy streets of the underworld. Three new heroes join the rebellion to search for an ancient artifact, aided by the presence of Ahsoka Tano. The Emperor himself leads his troops in an effort to thwart the Rebels and claim the artifact as his own. But the Emperor is not the Rebels' only competition. Any face in the crowd might hide the true identity of the deadly Clawdite Shapeshifter, working in the employ of the former Sith, Maul!

Expand your skirmish battles with the massive AT-DR, baton-wielding Riot Troopers, and twin-gunned Sentry Droids, along with the new command cards and scenario maps included in Heart of the Empire! New energy shield and rubble tokens will throw a wrench in your opponent's plans, while new power tokens give you more control over your fate than ever before!