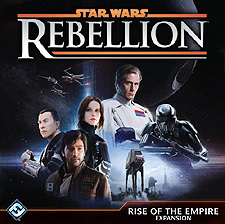 It is a dark time in the galaxy. The oppressive rule of the Galactic Empire spreads from system to system, destroying all peace and hope. Worse still, there are rumours that the Empire is constructing a secret battlestation of unimaginable power.

A group of unlikely heroes have banded together against this overwhelming threat. They must rally others to their cause, infiltrate the Empire, and steal the plans for the Death Star before it is too late.

Rise of the Empire provides a plethora of exciting new options for the Star Wars: Rebellion board game. Heroes and villains from Rogue One: A Star Wars Story and fan-favourite characters like Jabba the Hutt bring their skills to the fight for the fate of the galaxy. In addition, new vehicles and new cinematic combat rules lead to tense battles filled with thematic moments.

Regardless of your loyalty, this expansion is filled with many crucial tools that will help you conquer or liberate the galaxy. The time to fight is now!