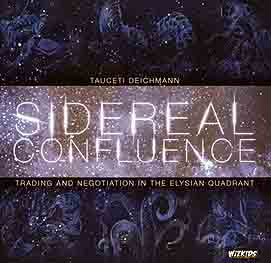 For thirty million years the galaxy lay dormant - the ancient Faderan and their scattered creations its only inhabitants.

Now new species are taking their first steps toward the stars, but their world views are utterly incompatible. War would be inevitable if they were allowed to expand without structure, so the Faderan held back some and advanced others. They are orchestrating a grand Confluence: a bringing together of civilizations to build a single overarching society where everyone will be the equal of the others.

The competing species find themselves working together to build that joint society, striving to have the greatest impact upon its culture. Interaction between alien species is making each of them astoundingly wealthy. They are using that wealth to invent and share the technologies, to solve myriad challenges and shape the new society in unimaginable ways. In doing so they hope to forge a new galactic civilization that stands forever.

Sidereal Confluence: Trading and Negotiation in the Elysian Quadrant is a singularly unique trading and negotiation game for 4-9 players. In this game, where play is almost all simultaneous, each unique and asymmetrical race must trade and negotiate with the rest to acquire the resources necessary to fund their economy and allow it to produce goods for the next turn. Scheming, dealing, and mutually beneficial agreements are key to success. While technically a competitive game, Sidereal Confluence has a uniquely cooperative feel during the trading phase as no race has the ability to thrive on its own.

The Confluence follows, when players bid for colonies and research teams. Those research teams are funded with resources during the next trade phase, and players share the resulting technology during the following Confluence. With each cycle, everyone's economy grows, and the inventors gain victory points in return for having shaped society.

The ultimate goal is those victory points, which can also be produced directly through a player's economy, and by converting their leftover goods at the end of the game.