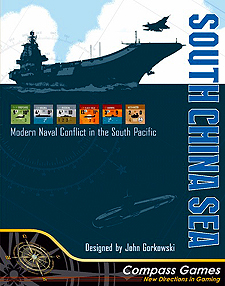 'God save thee, ancient Mariner!
From the fiends, that plague thee thus!
Why look'st thou so?
With my cross-bow I shot the ALBATROSS'.
- The Rime of the Ancient Mariner, Samuel Taylor Coleridge, 1798

Indeed a mixed blessing now looms and precipitate action could trigger disaster. The global system that enabled China's peaceful rise has also resurrected the multi-polar world that faded in 1945. The South China Sea has emerged as a place of increasing friction between those poles.

The game, South China Sea, offers players a space within which to explore options and alternatives for dealing with complex, multi-party, maritime conflict in that region. Games usually begin with rounds of competitive card play keyed to real world economic, political, and diplomatic events which may or may not escalate to military action. Should an armed clash erupt, players use hex-and-counter mechanics to adjudicate combat between opposing air, sea, and land forces. Of course, eager "grognards" could skip the card play in favour of kinetics from the start.

The precise factors affecting play vary from one scenario to the next, and players could make their own! But, in general, card options include things such as: economic sanctions, freedom of navigation operation, the Chinese Coast Guard, high-level visits, etc. with pauses for negotiation among players, played out over turns that simulate 3-7 weeks of time. Military options centre on the use of individual ships, missile batteries, squadrons of aircraft, or battalions of troops to deny access or assert dominance over key terrain features on a map scaled at 45 nautical miles per hex in turns that simulate 3- hours each.