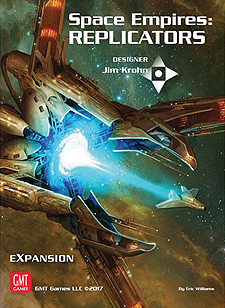 Space Empires: Replicators is the second expansion to Space Empires 4X. There are 4 Major Parts to this expansion:
Replicators: Von-Neumann Machines (or Replicators) are self replicating machines. They have been added to the game and may be played by one player in the game. So much more than just adding a 5th player, they add an Empire that plays Completely Differently than a normal Empire. It is simpler to play, but has its own challenges and difficulties. They behave, research, and reproduce differently than other Empires and they have their own Empire Advantages.
Terrain Tiles: Hex sized terrain tiles have been added for planets, asteroids, nebulae, and other permanent terrain effects. Six whole sheets and 120 tiles! When an exploration marker reveals a terrain effect that stays on the map, the exploration marker is removed and replaced by a tile. This gives the map a nice visual effect and creates more room in the hexes.
Resource Deck: Each player is dealt his own (random) Resource deck at the start of the game. These cards can be Used As An Event or turned in for CP. Some cards impact battles, exploration, economics, almost every aspect of the game - they add some unpredictable twists and can impact your strategy.
New Ships and Terrain: More new stuff has been added, including the Galactic Capital (which comes with its own scenario), Regional Map, Space Pirates, Fold in Space, Battle Carriers (BV), Fighter 4s, Advanced Destroyers (DDX), Advanced Raiders (RX), 2 new Empire Advantages, 2 new Alien Tech Cards, and some additional and corrected counters. The system is exactly the same, but more awesomeness is added!