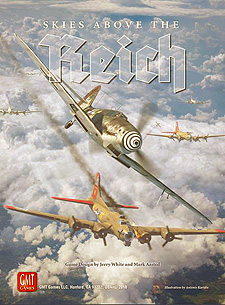 Skies above the Reich

Bombers fill the sky and the pressure is on. Hundreds of enemy bombers sky in tight formation each bristling with .50-caliber armament aimed to every direction. Can you make a dent in the American air campaign, and if you do, will you still have a staffel to send home.

Skies Above the Reich is a solitaire game depicting a Luftwaffe squadron of Bf109s struggling to deter and destroy the relentless daylight raids over Germany during World War Two. Each fighter in your staffel is represented by a stickered block, and together they must confront the mighty "combat box" formation of the United States Army Air Force. This tactical game is a broad strokes depiction that presents the arc of the desperate air war. Stretching from late 1942 to early 1945, Skies Above the Reich follows that trajectory in a series of missions strung together to make a campaign. Each mission will take a half hour or more to play, while a campaign can last anywhere between 6 to 60 missions. In each mission you must take altitude and armament into consideration, as well as choice of weapon, angle of attack, and especially the determination of pilots to knock down those bombers... and to survive. The combat box is a prickly beast, both a target and a lethal weapon, and your job is to figure out how to throw your pilots against it. Can you loosen the formation and knock bombers out, allowing your pilots to pounce on lone bombers? Will you choose rockets as your weapon of choice, or will you manoeuvre your fighters to come out of the sun and wreak havoc on the Americans? Will you keep your pilots together to attack like a sledgehammer, or will you split them up to come at the bomber formation from multiple angles? And what will you do if the bombers are protected by escort?