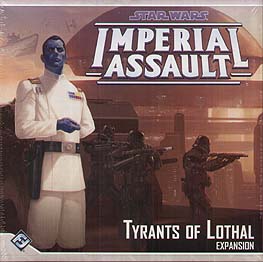 Stand Together As One

The Empire tightens its grip on Lothal! Int he early days of the Rebellion, Grand Admiral Thrawn plots to crush all who resist Imperial tyranny before they can become a greater threat. But the fires of resistance are already burning, and new heroes rise to join the struggle for freedom...

Join a fight for the freedom of Lothal with Tyrants of Lothal a new expansion for Imperial Assault! Six new missions take the battle to Lothal and beyond as a self-contained mini campaign. Two new heroes join the fight alongside the daring crew of the Ghost, but they'll have to face the treacherous Hondo Ohnaka and the Empire's most brilliant strategist, Grand Admiral Thrawn.

agendas, classes, and items, any campaign can benefit from the influence of Cloud City.

Bolster your Imperial Assault skirmish forces with new Command cards, missions, and figures, from feisty Loth-cats to the formidable Death Troopers. The future of the young Rebellion depends on you!