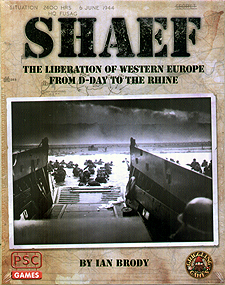 SHAEF: The Liberation of Western Europe from D-Day to the Rhine

SHAEF is a two player, card driven, World War II strategy game, covering the period from June 1944 to March 1945, by the acclaimed designer of the Quartermaster General series of games, Ian Brody.

Gameplay is at an army and corps level, with each turn of the game representing a full month on the board; lower echelon forces (such as divisions and brigades) are represented by cards assigned to the army counters. Other cards provide combat support and special tactics for each side.