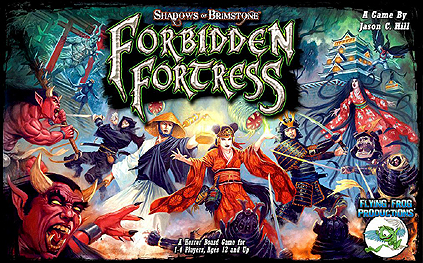 It is the mid-1560s in Feudal Japan and the entire country has been engulfed in a brutal civil war for over 100 years. While the countless Samurai Clans battle one another for dominance, a blazing meteor streaks through the sky...the 'Sword of Heaven'! Crashing into the Sacred Mountain, a cataclysmic explosion showers the countryside in a glowing, black rock... Dark Stone. Collected up by the nearby Clans and greedily hoarded into their fortresses, the Dark Stone has magical properties as it is forged into weapons and armor, giving any who wield it an edge in battle. But the power of the black rock could not be contained! Portals to other worlds rip open wherever the Dark Stone is concentrated, unleashing creatures of myth and legend to spread across the land! While most flee in terror, some heroic individuals step forward with honour, fighting to hold back the Darkness!

Shadows of Brimstone: Forbidden Fortress is a fast-paced, Cooperative, dungeon-crawl boardgame set in Feudal Japan, and mixed with Unspeakable Horror! Each player creates a character, taking on the role of a classic Japanese Hero Archetype, such as a Samurai Warrior, ninja Assassin, Travelling Monk, or even a mystical Sorceress. Forming a party of Heroes, the players explore a dynamically generated fortress, overcoming dangerous encounters and fighting savage creatures, while collecting Gear and Artefacts to help them on their adventure. Heroes can even find portals to other worlds, stepping through to continue their adventure on the other side.

A campaign system allows Heroes to be kept from game to game, earning experience and going up in levels to increase their skills and gain new abilities. The Heroes can also visit local Feudal Villages between adventures, spending their hard-earned loot and re-supplying for the next mission. So draw your swords, strap on your Samurai Armour, and gather the party, the Darkness is coming, and the gates of hell are about to break... in the Forbidden Fortress!

This game includes a full set of interlocking, double-sided Map Tiles, featuring a Japanese Fortress on one side, and a living world inside a massive creature, the Belly of the Beast on the other side.

Shadows of Brimstone is an expansive game world, and this Core Set is just the beginning! Forbidden Fortress is fully compatible with other Brimstone Core Sets, Enemy Packs, Other Worlds, and expansions!