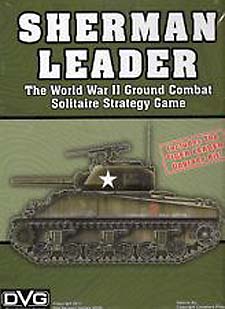 Sherman Leader places you in command of United States combat vehicles and infantry units in the most decisive campaigns of WWII! You select the Tanks, Vehicles, Infantry, and Commanders to lead into battle at the start of each Campaign. As the destruction of battle takes its toll on your command, you make the decisions needed to continue the fight. You must decide which men to send On Leave, and which to send back to the front. You must make the hard choices that will lead your men to victory, or defeat.

Sherman Leader is a Solitaire Game. You command the American forces and make historically accurate decisions while the built-in game system generates the battles and controls the German and Japanese forces. You play the game at your own pace, whenever and wherever you choose.