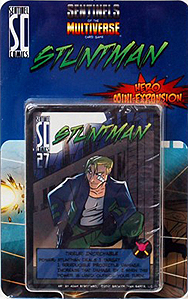 A Sentinels of the Multiverse mini-expansion.

Stuntman was formerly the fearsome hero hunter, Ambuscade! Now he returns as an action hero!

Includes a unique deck of 40 hero cards, a charactr card, and a divider card.

Ansel G Moreau has always been more than happy to take whatever jobs the highest bidder offered, all the while lookin for the greatest challenge of his illustrious career.

After being bested by the heroes several times, he was ready to rid himself of his combat gear and return to his roots with a life of performing stunts in motion pictures. Then, oblivaeon attacked, but that would not prevent Ansel from stealing the scene as gunman and combatant he'd trained to be.

Now Stuntman fights alongside the heroes of the multiverse in order to save all reality from complete destruction. Plus, if they prevail, then Ansel would finally have bested an adequate challenge.