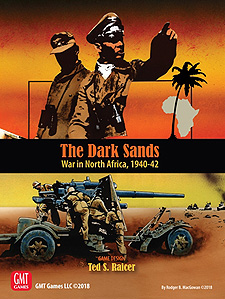 The North African Campaign in Egypt and Libya from December 1940 to December 1942 was a chaotic war of manoeuvre that swept back and forth between El Agheila and El Alamein. Major operations such as Compass, Sunflower, Crusader, and Gazala were all dominated by mobile combat. At El Alamein in late 1942 the combat is better described as trench warfare where the influx of Allied forces finally defeated the Axis.

The Dark Sands is a chit driven operational level ground combat game covering this period of the North Africa Campaign. Logistics is abstracted into the chit system and turn length. Combat support such as naval, air, anti-tank, and artillery are represented by assets that can be assigned to individual combats. Each of the four scenarios can be played alone or used as the starting point for the campaign game. Can you recreate O'Connor's victory in Compass, reach Halfaya Pass as Rommel in Sunflower, or stop the British in Crusader, or reach El Alamein before the British dig in after Gazala?