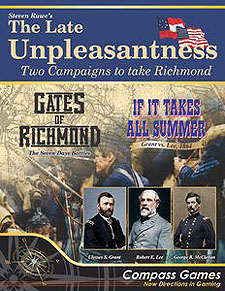 Two card driven games on the campaigns to take Richmond during the American Civil War.

The Late Unpleasantness is a card driven game which covers the two major attempts to capture the Confederate Capital City: McClellan's Peninsular Campaign of 1862 and Grant's Overland Campaign of 1864. Each game stands alone, but has the majority of rules in common.

If It Takes All Summer is Ulysses S. Grant's overland campaign of 1864.

Gates of Richmond:
With a Federal army of more than 100,000 well supplied soldiers poised on its eastern flank, the citizens of Richmond, Virginia warily awaited news from the tenuous lines along the swampy Chickahominy River. In what would prove to be one of the more savage and remarkable campaigns of the American Civil War, the Army of Northern Virginia under the leadership of a new commander named Robert E. Lee would take to the offensive against George B. McClellan and his mighty Army of the Potomac.

If It Takes All Summer:
In the spring of 1861, Richmond Virginia become the capital of the Confederacy. It was situated between the plantations of the Tidewater and the arms of the Piedmont, and it benefited from its location along major trade routes. At only 120 miles from Washington DC and because the city was the Confederate capital, it became the focus of Union attention.