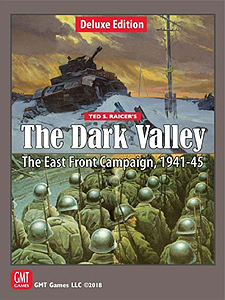 Message from Winston Churhchill to Joseph Stalin, May, 1945:

"...after all the sacrifices and sufferings of the dark valley through which we have marched together we may also in loyal comradeship and sympathy walk in the sunshine of victorious peace."

The Dark Valley is a new look at the vast and terrible conflict on the East Front in World War II, from the gates of Moscow, and the horrors of Stalingrad, to the ruins of Berlin. LArge in scope, but simple and elegant in play, The Dark Valley uses a random chit-pull activation system that is unique for this subject. But this system does more than provide for the fog of war and friction of these campaigns. By adjusting the mix of action chits from turn to turn, the game models both the evolution of Soviet capabilities, and the gradual decline and fall of the vaunted German Army.

The Dark Valley covers the full range of this conflict: air support and bombardment, Shock Armies and Tiger battalions, artillery and forts, amphibious invasions and paradrops, Axis logistical constraints and weather effects, Zhukov and Manstein, and much more. Yet with all this, The Dark Valley remains a fast-moving player's game, one you will want to return to again and again.

Besides the 1941-45 campaign game, The Dark Valley features scenarios for Barbarossa, Case Blue, Kursk, and the Destruction of Army Group Centre. Scenario start dates can also be used to explore shorter versions of the campaign.